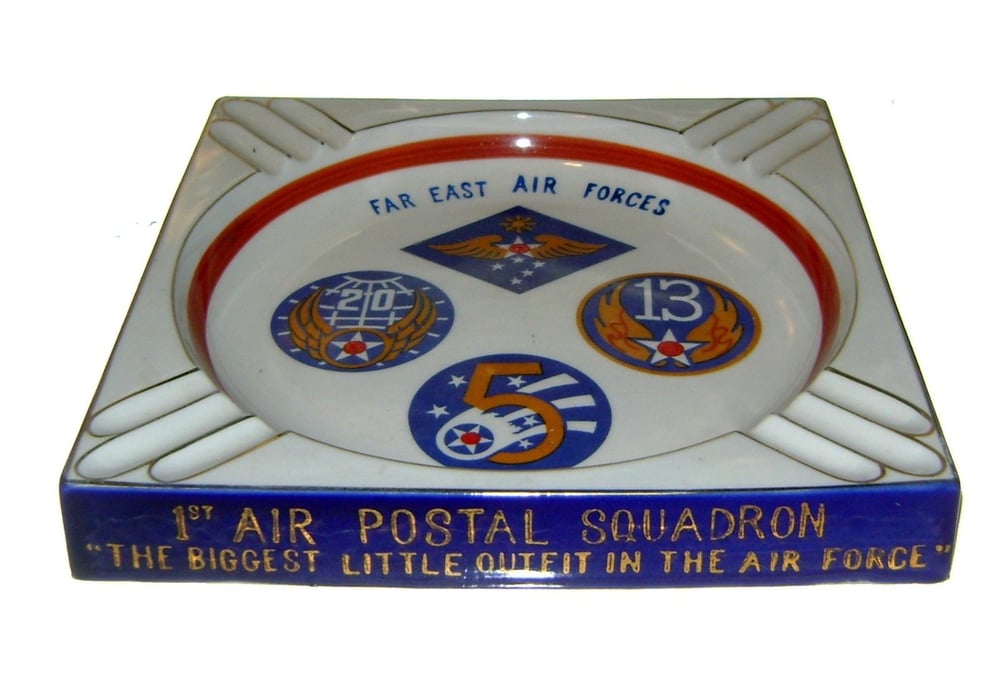 We have decided to add random military collectables to the site on occasion to help make this site more of a unique experience. The first of which is this cool early 1950's Korean War Era ash tray.

This unique ash tray is from the 1st Air Postal Squadron, "The
Biggest Little Outfit In The Air Force", Far East Air Forces. These men and women were responsible for the delivery of all the mail to the soldiers during wartime. The sides of the ashtray read Japan, Korea, Philippines. Iwo Jima, Okinawa and Guam respectively. Ashtray is in near mint condition with no nicks, chips, cracks or crazing. There is no gold trim missing either. It measures 7 3/8" inches by 7 3/8" inches square by 1" inch thick. This is a great collectible. Marked made In Japan on the back with letters SJK under laurel leaf.

Initially the Far East Air Force also included aircraft and personnel of the Philippine Army Air Corps. Outnumbered operationally more than three-to-one by aircraft of the Japanese Navy and Army, FEAF was largely destroyed during the Philippines Campaign of 1941–42. When 14 surviving B-17 Flying Fortresses and 143 personnel of the heavy bombardment force were withdrawn from Mindanao to Darwin, Australia in the third week of December 1941, Headquarters FEAF followed it within days. The B-17s were the only combat aircraft of the FEAF to escape capture or destruction.

FEAF, with only 16 Curtiss P-40s and 4 Seversky P-35 fighters remaining of its original combat force, was broken up as an air organization and moved by units into Bataan 24–25 December. 49 of the original 165 pursuit pilots of FEAF's 24th Pursuit Group were also evacuated during the campaign, but of non-flying personnel, only one of 27 officers and 16 wounded enlisted men escaped the Philippines. Nearly all ground and flying personnel were employed as infantry at some point during their time on Bataan, where most surrendered on 9 April 1942.

The surviving personnel and a small number of aircraft received from the United States were re-organized in Australia in January 1942, and on 5 February 1942 redesignated as "5 Air Force". With most of its aircraft based in Java, the FEAF was nearly destroyed a second time trying to stem the tide of Japanese advances southward.